“The crossover step is important because rarely are sports played in a straight line,” says Tim Moyer, MS, CPT, head volleyball coach at Philadelphia University and longtime strength and conditioning coach across a number of disciplines. Whether you’re playing a game of softball or tag in the yard with your kids, changing directions is an important skill to learn to do well, says Moyer. 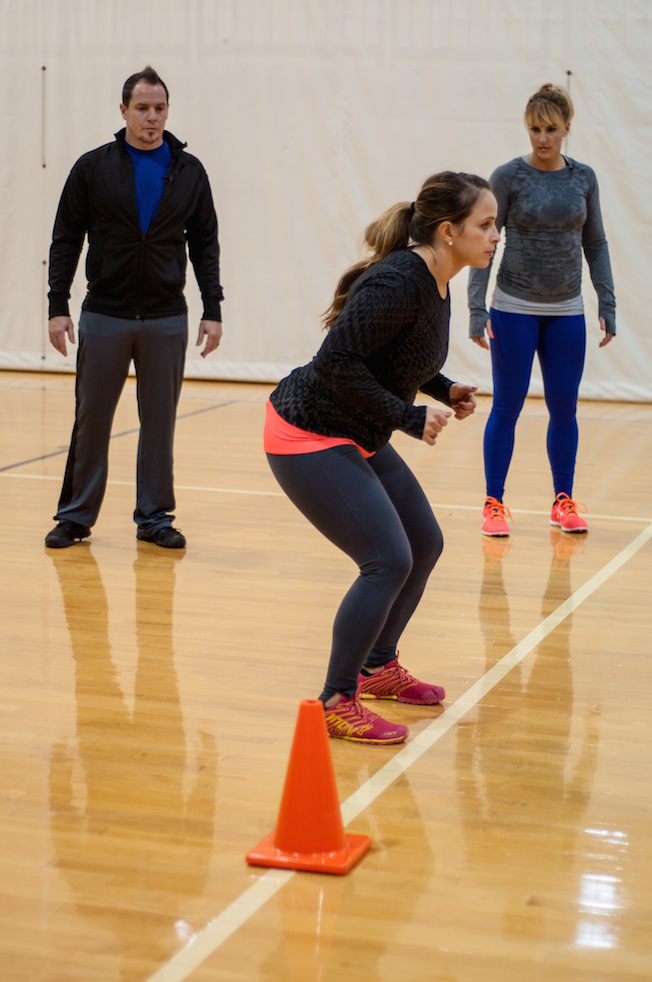 You might be familiar with this scenario. You’re playing on a rec-league softball team and although it’s just for fun, of course you want to win the game…and, let’s be honest, the tournament at the end of the season would be nice, too. In the outfield you’ve got to be ready to move in any direction when the ball comes your way. You spend most of the game with your hips dropped into a quarter squat, ready to take quick action.

“The crossover step is important because it’s a faster and more efficient lateral movement, meaning it covers more distance with each step then a side shuffle (the other common lateral movement),” says Angie Brambley-Moyer, assistant director of strength and conditioning at Princeton University. Furthermore, she says “many athletes don’t understand the importance of arm and leg drive. In using a side shuffle, your foot, knee and hip remain lower to the ground, while in a crossover step you pick the foot, knee, and hip higher to travel more distance and create more force.” More force means moving faster, and that’s exactly what you want to do on the field.

But when was the last time you practiced moving sideways from a dead-stop position? It’s just not something day-to-day life requires on a regular basis, which is why learning to be quick and explosive in any direction will give you an edge over your competition. Moyer knows how important it is because he works with athletes everyday. “The crossover step bridges the gap between forward, backward, and lateral movement performed from all different angles,” he says. That means you’ll be able to keep your eye on the ball and be ready to snatch it out of the air no matter which direction it’s headed.

The Crossover Start is all about focusing on starting sprint mechanics from a sideways position (facing perpendicular to the direction you want to go) and emphasizing a late head turn.

From your starting position, you will only sprint 5 yards and then coast to a stop after each rep. Use one cone as the starting line and another cone 5 yards away. Walk back after each rep as rest. Perform the drill for three sets of five reps per side before embarking on the rest of your planned training session that day. Practice this skill once or twice per week.

The set position is facing sideways on the starting line in a quarter-squat position with your weight balanced in both feet, ready to react and run in either direction.

To initiate the sprint, push hard off the lead foot and drive the hips so that the back leg crosses over in front of you. It’s important to learn to be patient in your lean and not take your first step until you need to, this will allow a longer and more explosive first step and thus allow you to reach the target quicker.

During each rep, focus on not turning the head until after the back leg hits the ground after crossing over the body.

Moyer, Brambley-Moyer, and Sinkler have teamed up to get you stronger, faster, and more agile. You don’t have to have any experience playing sports, and you don’t have to play any in the future, either, if you don’t have the inclination. You only need to be interested in training like an athlete, in moving like one and looking like one.

Whether you’re a seasoned athlete or you’ve never played a sport, the program gives you everything you need to hit the ground running (pun intended, of course) and will include:

Here’s the best part. To celebrate its release, Lightning & Thunder is on sale for HALF OFF now through midnight Friday, June 3rd. For more information click here:

Jen Sinkler is a longtime fitness writer and personal trainer who talks about all things strength related at her website, UnapologeticallyStrong.com. The former editorial director of fitness for Experience Life magazine, she writes regularly for a variety of national health magazines. She’s a certified RKC 2 kettlebell instructor, and a powerlifting coach through USA Powerlifting. She also holds coaching certs through Ground Force Method, Progressive Calisthenics, Onnit Academy, and DVRT (Ultimate Sandbag).

A lifelong competitive athlete, Jen played rugby for 13 years, many of those on the U.S. women’s national 7s and 15s teams. She now co-owns the gym The Movement Minneapolis with her husband, David Dellanave.